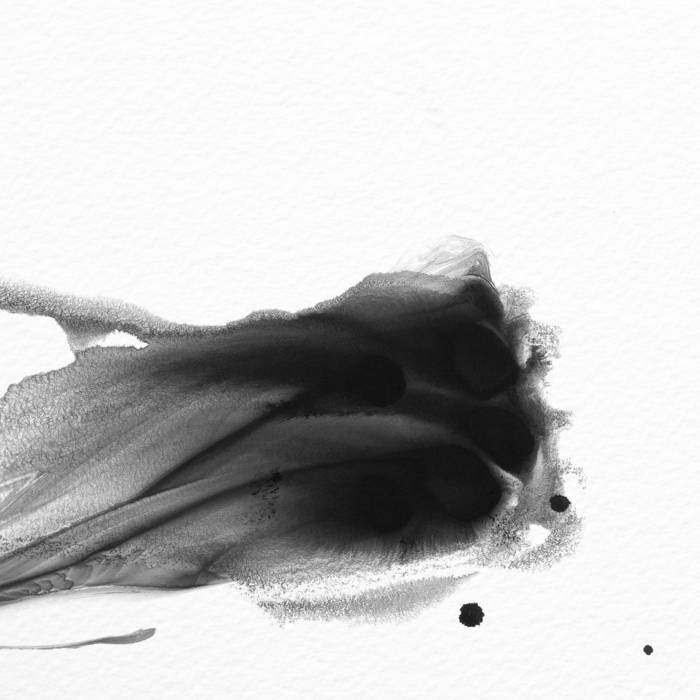 Expanses of silence and delicate fluctuations of distant white noise are given structure and potency through sudden, brief gestures, and disembodied utterances in Drouin/Olsen’s third album of un-edited studio improvisations, ABSENCE & FORGIVENESS. Through generous use of space, a greater understanding of the individual artists’ voices becomes possible as they engage in a highly restrained challenge-response conversation between their respective instruments.

‘No matter how much in touch with the world of improvised music I think I might be, no matter how many CDs fall through my letter box there are still odd occasions when Brian writes about something I hadn’t heard of, my interest is piqued and I go and buy the CD in question. The most recent example of this was a new disc by the duo of Jamie Drouin and Lance Austin Olsen, two Canadian musicians who, according to the very nicely designed website for their very nicely designed label Infrequency Editions have been releasing CDs for ten years now without me noticing them. Shows what I know….

The disc I ordered then is a recent duo disc named Absence and Forgiveness. Its a CDr wrapped in a very lovely, though somewhat bereft of information card sleeve released in an edition of 100. The image on the sleeve is of a monochrome reproduction of what looks like a simple, unadorned yet detailed wash of colour. This image seems apt for the music on the disc, which masks a wealth of detail and careful construction behind a mask of simplicity and restraint.

It isn’t clear what either of the musicians work with to make their music, but it is vaguely speaking electro-acoustic in texture, perhaps guitar pick-ups or contact mics are in use, perhaps instruments (tabletop guitar? I sense I hear strings here and there) are used, perhaps not, but it doesn’t matter much. There is a radio to be heard often throughout the three pieces, contributing little jabs of spoken word in the first pieces, and longer streams in the final, slightly more dense third and final track. The music here sounds like it was improvised without any post production, though I may of course be completely wrong. It is generally speaking very sparse, quiet and full of either white space, or quite often grey expanses of varying density and texture. Scattered about though are little fragments of sound of varying types, some radio bursts, some sudden hits of white noise, shards of harsh feedback etc, but these are infrequent and placed with great care so as to continually challenge and shape the music into different directions, keep it from slipping into any kind of ambient flatlining.

One interesting element here is that, if I had been given this disc blind, I would probably have guessed at this being a solo recording. I say this because the music feels very much like a single, purposeful construction, perhaps in the vein of something like Daniel Jones’ recent When on and off collide. While the music here is full of tension formed from the mix of jagged edged fragments, silence and grey fields of texture, it doesn’t feel like a struggle between two musicians, and it doesn’t sound like there is the usual push and pull of improvised interplay taking place. It seems Drouin and Olsen have been playing together for a long time, and it really shows here as the pair seem to work together to one, quiet, subtly measured goal- their sounds are thoroughly complimentary and their musical ‘voices’ are indistinguishable.

As Brian wrote in his review of the disc, there is actually little here that we haven’t heard quite often before, but while the array of sounds used, and the quietly contemplative atmosphere attained are familiar from a number of other releases in this area, there is something somehow quite mature and refined about this duo’s music. Its as if while their palette is familiar how they apply the colours has a subtle, yet confident voice. A really strong forty-two minutes then and a nice discovery. Looking forward to hearing more.’

‘One of those all too rare experiences when an entirely lovely recording drops in from out of the blue, or Canada in this case. Though not much info is provided, both appear to be utilizing electronics of some sort and the three pieces are live improvisations. They share an extreme delicacy and quiet, combining faint sine-like tones with various other small sounds, buzzes, clicks, etc., all spread out, gently pricking the space, weaving this way and that. By description, it doesn’t sound all that different from any number of efforts in recent years, but something about this one stands apart–the sensibilities involved are unique and, I get the feeling, simply more intelligent than many, making subtle choices that you don’t come across often. You think you have things pegged then, on the second track, they don’t so much as veer off as take an adjacent path that was there all along but untrod, introducing brief, low flutters and tiny snatches of spoken word, coloring the field in an unexpected but, retrospectively, absolutely appropriate manner.

The final track seems to bring in all these elements, but again, very low key, very subtly. Something about it just gels even more than the first two, feels even more a natural extension of one’s room space. Really good, better than I’m able to delineate here.

It’d be a shame if this one gets overlooked. Do yourselves a favor and check it out.’

The haiku is, paradoxically, a poem about silence. Its very core is silence. There is probably no shorter poetic form in world literature than the classical haiku with its seventeen syllables, and yet the masters put these seventeen syllables down with a gesture of apology, which makes it clear that words merely serve the silence.

All that matters is the silence. The haiku is a scaffold of words; what is being constructed is a poem of silence; and when it is ready, the poet gives a little kick, as it were, to the scaffold. It tumbles, and silence alone stands.
~ David Steindl-Rast

I have listened and listened to three releases on the Infrequency Editions imprint these past several months, three works by the life-long painter and decade-long sound artist Lance Austin Olsen, and a musician with considerable experience in the exploration of how environments and humans interact, Jamie Drouin.
Many of the sounds in their collaborative work, considered as discrete elements, are familiar to my ears, and certain referents come to mind upon repeated listens – the multivalented, jigsaw assemblage of Absence & Forgiveness is somewhat reminiscent of the Annette Krebs/Taku Unami’s duo release, motubachii; the sustained interest in extreme pitches, heard on Savonarola and 1498, particularly those on the frequency scale that get my dog’s alert attention, invoke the Stasis Duo, as well as the invariable touchstone for this area, Sachiko M and Nakamura.

They are, however, set apart in the field not by a sui generis sound palette, but by their approach as a duo who clearly work with a heightened, joint intuition for the placement of sound and silence, and the subtlety with which the scaffolding for the ephemera created by their poor man’s arsenal of sound-generators – a suitcase analog, some scarred amplified copper plates and a toy guitar – is created, then kicked away. Drouin and Olsen no sooner have their sounds meticulously stacked, layered or threaded together, and they send them tumbling, sometimes precipitously. Every sound that is jettisoned impinges on us with the sound of its subsequent, frequently sudden, absence.
Given the length of the three releases considered here, 51, 42 and 31 minutes respectively, it is crucial, if the duo are to sustain interest in this approach, that they maintain a balance between subtle, intricate construction, sound canvases built up largely with minute sonic strokes and textures [though they can snap you to with an occasional tossed bomb of noisy grit and scree] , and the recurring collapse and disintegration of their definite and indefinite pitches.

They do so, over and over; non-linear, seldom assuaging us by allowing the ear to get comfortable within a certain area or development, yet supremely unhurried, Drouin and Olsen make music like they have spent no small amount of time reflecting on and linking their sound work to their visual work. Music, of course, makes it possible for the duo to return our attention,
again and again, to the silence at the core of their eventful, often near-silent, sound world.

1498 approximates an electrical storm – about two weeks ago, my part of the world experienced just such a hella storm, during which I happened to be listening to 1498’s skitter, clatter and roar. This made for a near-perfect milieu of sound and weather. Olsen’s amplified copper plates, recycled from his dry point engraving works, hold a world of unstable ambient sounds, and Olsen unlocks them all.
Savonarola is the release that has the sort of guitar string scrapes and smushed Brillo-pad effects Keith Rowe developed with his restless tool accretion years ago – I mention these as they are really among the very few familiar sounds along the way, where Olsen’s toy guitar is concerned. Drouin generates great clouds of black, smokey low-end rumble and distressingly high tones that fake and feint toward a Shepard scale, making their abrupt disappearance the more startling.

There are more than a few passages of solemnity and, insuring the duo never settle into the dronesphere, alarm, tension and apprehension. This is another distinct quality of this duo, one difficult to attain, I think, in such abstract music – a sometimes powerful sense of reportage or narrative about the current state of the world. Only on Absence & Forgiveness do Drouin and Olsen allow into their materials an explicit hint of that anxious world, what is on the end of every fork – nearing the end of the piece, radio captures of a woman being interviewed about a murder and the absence of justice, her voice gradually clarified in the white hiss and other racket it is embedded in. The emergence of this report is unnerving and moving, and the fragments of words like forgiveness and justice hang for a moment in the air, before collapsing into a loud hum of bass, then silence.

I am, as often as not, drawn especially to the work of musicians in duo; the pairing of Jamie Drouin and Lance Austin Olsen bears the sort of fruit that makes the duo form so compelling – no place to hide or obfuscate, the great potential for a unilaterally-generated disaster, but equally the potential for what buddhists call the one taste – that is the state in which the boundaries between dissolve, and, as in Drouin and Olsen’s music, what is revealed is one mind. Or as Steindl-Rast has it, the form is scrapped, and we return to silence.

Jesse Goin | Crow with no Mouth