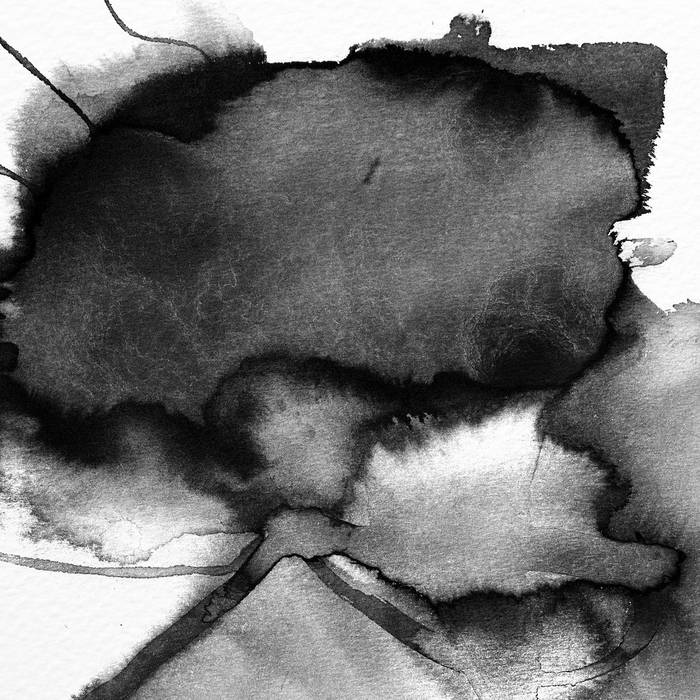 A long-distance collaboration between Lee Noyes (no-input mixer) and Lance Austin Olsen (voice and objects) working from a visual score by Olsen.

"One day, my friend Craig had a stroke; he was in his mid 40’s. I wrote in my book – Craig’s stroke – there it was, everything I knew, all jumbled together, just like Craig’s mind. I never saw Craig again, but I continued my notations, and always felt that this was now a document of Craig’s difficult and unplanned journey.

A few years ago I attempted to translate the concept into a triptych, or three movement work. I placed all kinds of marks and notations on three sheets of paper. Eventually, more and more, these marks were painted out as I became acutely aware of the loss of reasoning because of the trauma to the brain. I painted everything black and, except for the few marks and notations that remained, nothing could be seen inside the blackness, everything was still there in the work, but it could no longer be seen or reached.

I sent the work to Lee Noyes, and what he returned to me was perfect, but it needed a physical presence, how was I to do that?

I spent a few nights sitting in my creaky studio chair trying not to move or say anything, wearing headphones, and recording my unconscious reactions to Lee’s realization of the score. Finally, there it was, the presence."

The album is based upon a visual score, a large three panel mixed media painting on paper by Olsen from 2011. Was there a preliminary discussion about how to structurally approach interpreting it, or did you create your own independent method?

Lee: The three panels that make up the score for Craig’s Stroke were one of a number of different works Lance had sent my way after his invitation to work together. From our first correspondence he was quite specific in that his preference was to not provide explanations or discuss ‘methods’ prior to me working on them, wishing rather to hear only the results and respond from that. The level of trust that this implied put me at ease in interpreting each individual work in the way that I felt best. I had few other projects going on at that point, which together with Lance’s relaxed attitude to timeframes gave me ample opportunity to sit with and contemplate them and any approaches I might take before recording. Once recording began things moved very quickly for me; the paintings themselves and images their economical titles inspired, proved to be all the information I needed.

Lance: I had originally sent Lee a number of visual scores to possibly use, he sent me realizations for a single sheet score called “Particles and Waves” and also a 3 panel “Tijuana Dance Kings-Shadow Boxer” he asked if I had any others and that he had seen the black panels and would I send them. I was really impressed with his recordings so far so I immediately sent him “Craig’s Stroke #2” which was the end result of a huge series of sketches and notations.

We had no discussion prior to my receiving the recording, I had considered that the panels plus the title should be enough direction.

The backstory of the score is inherently emotionally charged – witnessing someone you know suffer a life-changing ailment. I’m curious how this influenced your interpretations?

Lance: Years ago I read a fantastic science fiction novel called ‘ A Canticle for Leibowitz’ by Walter M Miller Jr.

Set in a Catholic monastery in the desert of the Southwestern United States after a devastating nuclear war, the story spans thousands of years as civilization rebuilds itself. The monks take up the mission of preserving the surviving remnants of man’s scientific knowledge until the day the outside world is again ready for it. What really fascinated me about the book was that the most precious of all of the undeciphered items being preserved was a shopping list.

This concept of the importance of absolutely everything stuck with me and I began to use my sketch books as notebooks for everything that came up, which included shopping lists, brief ideas and notations, calculations, drawings, even as coffee coasters. I always carried a book with me and often they got wet in the rain, wine or beer was spilt on them and gradually images and words partially disappeared as new notations etc were drawn on top of them. Dampness would bring into view the back of the page or other pages and ink would leach through the paper creating new forms. These books resembled my mind far more than any formal or contrived artworks.

So in the beginning these notations were not about a particular event, just my belief that all these unimportant marks, writings and scribbles could become important as they changed.

Then the change, my friend Craig had a stroke; he was in his mid 40’s. I wrote in my book “Craig’s stroke’ there it was, everything I knew, all jumbled together, as I imagined Craig’s mind. I never saw Craig again, but I continued my notations and felt that somehow this was Craig’s difficult and unplanned journey, a journey that could have been my own in different circumstances. I, of course have no idea what goes on in anyone elses mind and for sure I know nothing about a traumatized mind, this is only my perception of the results of such an event.

The most devastating thing about what happened to Craig was his age, this scared us all, as I write this now I have other friends who have had strokes and died but we are now in our 70’s and this is not unexpected so certainly less traumatizing than a 40 year old man getting hit and laid low.

A few years ago I attempted to transcribe the concept into a triptych or 3-movement work. I placed all kinds of marks and notations and colour on the 3 sheets of paper.

Eventually they were painted out more and more as I was acutely aware of the loss of reasoning because of the trauma to the brain. I painted everything black and except for the few marks and notations that remained, nothing could be seen inside the blackness, everything was still in the work, but it could not be seen or reached.

Lee: I clearly wasn’t aware of this back-story; that the subject had been so acutely personal to Lance (this certainly struck me later and altered my perception of the results..) What I had before me at the time was the three images, covered in raw scratches and strokes progressively being superseded with the ‘blackness’. I could seem to tell there was a lot more going on behind this black surface than was obvious and imagined it portrayed a deterioration of memory of some kind. My electronics setup is based around (what is by modern standards) an aged Roland sampler. At the time of its manufacture in 1998 is was pretty cutting-edge with its internal iomega zip drive and floppy discs – 15 or more years on the drive is still chugging away okay, but the discs themselves, which are required for the machine to operate at all, do suffer from serious degradation over time and many of the discs I am forced to use are as old as the machine itself. The feedback dialogue between mixer and sampler has long felt to me like trying to map, or follow, or control the ‘nervous system’ of the equipment and certainly feels like an unsteady dialogue between its and my own… so in many ways working with the imagery implied in the title and score it seemed quite natural for it to be realised on this fragile equipment. This project also began around the time I first began experimenting with a piezo microphone. The foundation hiss, hum, occasional stutter and cloudiness of much of the piece is a result of the piezo being inserted into the drive as it struggles to find information on the disc.

Do you perceive this album as being narrative?

Lee: The thought had never really occurred to me, but perhaps it does… though if so I would imagine it would be in the sense that a Beckett play or a poem by Gertrude Stein has a narrative. By which I mean that from a relatively limited palette of material, sounds and events, quite a rich world opens up over the course of the piece. This is my perception only of course and came in subsequent listens well after the piece was completed – I’d had a significant pause between hearing my interpretations of the scores (which, as I mentioned, was quite consciously grappling with Craig’s inner state). That Lance subsequently provided the ‘outer’ I think resulted in a remarkably complete and balanced representation of everything implied in the scores themselves.

Now that even more time has passed I’ve had further chances to sit with the finished results, removed as actor and partaking as ‘audience’ – and I never fail to be struck with the poignancy of the result… yet I’m positively moved by the last act in an almost euphoric way and am left with a near tangible sense of hope despite the realisation of how fragile we all are, whatever our circumstances. Again, each set of ears with their own individual body of experience to draw from will likely come to different conclusions, but for me I think the piece finds that rare balance between the emotional and the cerebral and contains enough ambiguity to provide the listener plenty to work with… even constructing a narrative of their own, if indeed they need or wish to.

Lance: I have had trouble with this question and I am going to give a simple answer after much back and forth thinking about it.

This work did not, as I have pointed out, start as a particular event about a particular person, it did however through subsequent happenings, (Craig’s Stroke at 40) become the framework of my understanding or misunderstanding of the devastating events of brain trauma.

What Lee has written above, pretty much covers anything I would say.

A very enjoyable, thoughtful collaboration, but one of those where it’s difficult (for me) to say too much about it. As I understand it, Olsen sent an image he’d created to Noyes who, in turn, working with a no-input mixer, responded with the initial layer of sound to which Olsen then affixed (a verb that seems somehow appropriate given his work as a painter) other sounds of a non-electronic nature. Somewhere during this process, Olsen learned of a stroke suffered by his 40-year old friend, Craig, and incorporated his thoughts on that event into the project.

The result is some 49 minutes of quiet–generally very quiet–but prickly music that conveys, for me, a great amount of tautness and tension. Small crackles, delicate (though often harsh, in a tiny way) hums, the odd bang or breath. It’s “not there” to a degree that you can easily lose track of it but I think, if so, there would still be a vague sense of disquiet imbuing the room. Perhaps the sounds, as they emerge, might be analogous to the unblacked-out portions of the triptych painted by Olsen (see below). A subdued, wooly vibration comes through in the waning minutes of the piece, like a generator from the next room with occasional power surges. There’s a bit of a surprise a couple of minutes before the end, when we encounter, out of the blue, a loop of some orchestral music, vaguely cartoony in nature, before that fuzzy throb resumes dominance, ending curtly.

A fine, contemplative recording, tough going or not depending how one chooses to listen.