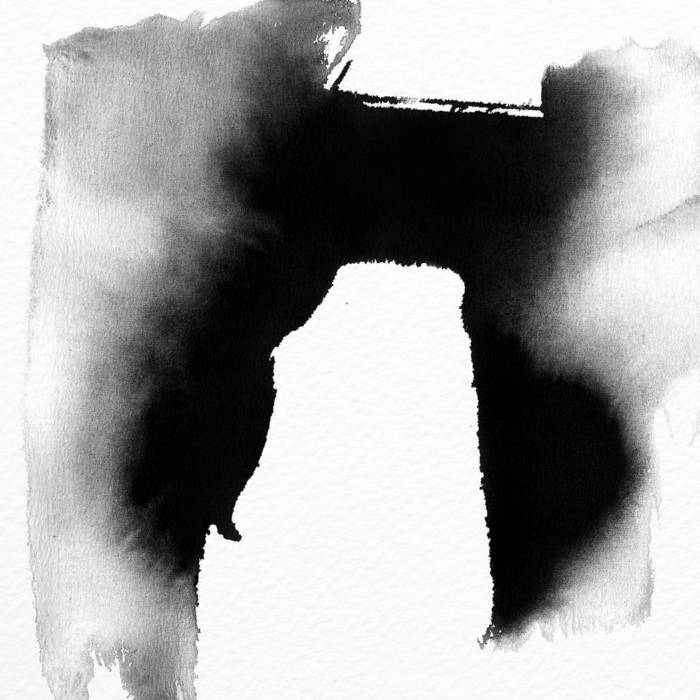 When the light is just right in a space, we can observe fine particles of dust shifting in the air currents, vibrating in place, before being shuffled away into unexpected patterns.

I relate this story not to describe TUMBLE as being a gentle album, but that its method of construction is one of an observable, unpredictable relationship between two elements.

Macroscopic shards and particles of sound are coaxed out of Johnny Chang’s violin, partially familiar to the ear, in that we recognize the instrument, yet the point of view is one through a magnifying glass where, instead of a concentrating on the defined tone of a vibrating string, we hear the action itself – the physical meeting between rosin, hair, and gut.

Moving along an intersecting plane, Jamie Drouin’s undulating harmonics of sine tones and statics, create an electrical air current which pushes, redefines and, at times, alienates Chang’s violin. Drouin occupies an undefined territory between foreground and background – the exact influence on Chang is in flux, but his tones breathe alternating warm and cold life into the compositions.

Tonight a review of the second of three CDs here involving the British Columbian electronics / analogue synth musician Jamie Drouin. On this disc, titled Tumble he is paired with the Berlin based American violinist Johnny Chang, who I know mostly through his connections to the Wandelweiser school of composition, and sadly not that many CDs, and certainly not CDs of improvisation as the music on Tumble certainly is. Released on the Infrequency label, which is co-run by Drouin, the thirty-four minute long disc captures a recording session made at Chang’s studio late last year. the result is really rather good and has been on occasional play here a lot since the disc first arrived about a month or so back.

The first thing that hit me on hearing this album is that it isn’t anywhere near as quiet as I suspected it might have been, given my previous experiences with Drouin’s music and Chang’s connection to Wandelweiser. It is in fact quite often quite brutally upfront and almost aggressive. OK, so we are still hearing relatively soft analogue synth tones and vibrations accompanied by violin, so there is nothing earthshakingly loud here, but Chang has his instrument amplified so that every sinew of his bow as it draws across either strings or the violin’s body are magnified and placed on top of some often quite intense buzzing synth.

The focus of the album seems to be to follow the familiar patterns of placing acoustic sounds against obviously electronic ones, and adding shorter more incidental elements to longer sustained tones. Given that these relatively common ways of working are being followed here, the music becomes really interesting to listen to simply because of the choice of sounds. there is little we haven’t heard before elsewhere from Drouin’s synth patches, but his contributions work well because they are chosen at just the right times, with sudden shifts in intensity, brittleness and only just held in check aggression keeping the sounds interesting throughout. the electronic sounds never really become mere background washes, they have enough punch to them via their elementally simple forms to really form more than a bed for the violin. Drouin reacts to Chang’s input rather than just let his sound sit and be scribbled over.

That said, the way Chang cuts, rips even into the textural and colourful base of sound is a fine moment.Early in the first of the four pieces here the violin really marks out its territory by wrenching out some quit terrifyingly guttural screeches that overpower everything and really add a sharp shock to the deep rolling bass tones Drouin is working with at the time. After those early exchanges the duo seem to settle into a pattern of surprise and nudging uncertainty rather than anything more settled, though the near violence of the opening track is never quite equalled. Its all about those juxtapositions between the very different sets of sounds, the shadow cast across the synthetic tones by the expressive actions of the miked up violin working very well indeed. This is good music then, really quite simple at a basic level, a clash of two sets of sounds that in theory shouldn’t work together but do very nicely indeed. Chang in particular impressed me here, the confidence and directness that flows out of this music taking me by pleasant surprise. It all just hangs together well though, structurally and conceptually . It is not as interesting a CD as others that fall my way, but this is made up for with the intensity of purpose shown throughout. Another nice one from Infrequency then, with another very beautiful sleeve image.